Celebrating 100 years of women in the law at Supreme Court

As 2019, the centenary of the 1919 Sex Disqualification (Removal) Act, which paved the way for women to practice law, drew to a close, I was lucky enough to be at the unveiling of a new artwork at the Supreme Court – the first ever to depict women.

Commissioned by our client, the First 100 Years Project, and created by Turner prize nominated artist, Catherine Yass, the unveiling of the artwork was the culmination of an idea conceived by First 100 Years founder, Dana Denis Smith, and was Lady Hale’s ‘dream come true’ according to her speech on the night.

It was a privilege to be able to be there at the moment the piece was revealed in courtroom two, alongside so many inspirational women who have done so much for the profession and to shape the law in this country.

Lady Hale, the first woman president of the Supreme Court is pictured, as is Rose Heilbron, the first woman recorder (part-time judge) and Cornelia Sorabji, the first woman to ever sit the Bachelor of Civil Laws exam at Oxford University. The piece also looks ahead to the next 100 years with a representation of a female lawyer of the future.

The unveiling was a perfect way to end five years of hard work by the First 100 Years team who have been working to secure a legacy, charting the journey of women in law and celebrating the achievements of the first pioneers. I’m proud that Black Letter Communications has been their legal PR partner and played a part in that.

Many of the attendees, including the likes of Baroness Helena Kennedy, Dame Butler Sloss and Lady Arden were women lawyers who had been filmed for the project and are the profession’s pioneers, names I had heard many times over my years of working in legal PR.  Bringing all of them together made for a hugely positive atmosphere and speaking to them about the changes they have seen and what the occasion meant to them was inspiring.

We also arranged for BBC News to be there to capture the moment which formed part of segment on the centenary of women in law, aired over Christmas, bringing the story of women’s journey in the law to a wider audience. This followed an episode of BBC Radio 4’s Woman’s Hour solely devoted to a discussion of women in law with First 100 Years and it’s recent survey of women in law, front and centre. From a legal PR person’s point of view, a whole episode dedicated to your work is a real achievement and we were all glad to finish the working year off on a high.

Dana, always to be commended for the wealth of inspiring ideas she has come up with for the project, also arranged an accompanying donor wall at the Supreme Court, listing the names of 96 young women and girls who have been chosen by donor individuals and businesses to inspire them to enter the legal profession.

The artwork leaves a real legacy for future generations and will be seen by the 90,000 visitors who come to the Supreme Court each year, many of whom are children and young people.

We are very happy to have been involved with this fantastic project in 2019. In 2020, as we look forward to the next 100 years, we have some exciting legal PR plans in place with the team at Spark 21, the charity behind the First 100 Years as we begin a new chapter for the project. 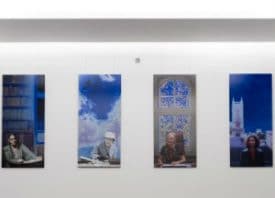