As a legal PR company anything to do with PR and communications spikes our interest, and this year has provided communications content in spades. Back in April, at the start of the pandemic, we looked at what we wanted and needed in our communications from the companies and organisations around us. When the virus was still very new to us, and there was a lot of fear, people were craving reassurance, empathy, warmth, solidarity – something that felt like a virtual hug.

However, fast forward eight months and the landscape is very different. Most of us have faced challenges this year that we couldn’t have ever imagined. We have experienced lockdowns, tiers, and furlough. We’ve adopted phrases such as ‘mask-up’, ‘circuit-breakers’ and ‘support bubbles’.

Our world has dramatically changed, and the way in which we communicate with it. A fact recognised this week by the Oxford English Dictionary, which has replaced its annual word of the year with several “Words of an Unprecedented Year”. They include bushfires, Covid-19, WFH, lockdown, circuit-breaker, support bubbles, keyworkers, furlough, Black Lives Matter and moonshot. Words which would have previously been a ‘slam-dunk’ on their own for inclusion.

Casper Grathwohl, the president of Oxford Dictionaries, said: “I’ve never witnessed a year in language like the one we’ve just had. It’s both unprecedented and a little ironic – in a year that left us speechless, 2020 has been filled with new words unlike any other.”

Our grasp and adoption of new language reflects our ‘coming of age’ with the pandemic. We have grown and adapted in order to meet the challenges of the year, and in turn our expectations of the communications we receive from the companies and organisations around us has changed.

Yes, we all still need empathy, warm and reassurance, but what else do we expect? Knowledge, decisiveness, honesty?

In April we identified the supermarket Iceland, Chris Whitty and the ‘Your NHS Needs You’ campaign as being examples of good communications.

So where has it been done right or wrong since?

It goes without saying that Mr. Trump and his tenure as President are never going to win any communications awards. From his internal communications to his public ones, he seems to lurch from one crisis to another, but his handling of the both the virus and the recent election have been public lessons in how not to communicate.

From painful White House briefings where he rambled about injecting cleaning agents, and light rays, to petulant tweets where he tried to call a stop to the counting of votes in a bid to stave off the end of his presidency, Trump has gone against everything that is key to good communication. He has not been well informed before speaking publicly, he has not admitted when topics fall beyond his realm of expertise, he has not been honest and he hasn’t shown effective and decisive handling of the pandemic.

Poor old Dom and his bad eyes… During what was a gruelling lockdown for the country, with many separated from family for months, and others facing severe financial hardship, the Prime Minister’s senior adviser made some serious errors of judgment. Leaving his home to travel a considerable distance while displaying signs of the virus was bad enough in itself. The biggest fallout occurred however, when he tried to justify it. The rules were quite clear, and Mr Cummings had broken them. As ever, the power of simply acknowledging this and apologising would have gone some way in assuaging the public. However, his repeated denials and reasoning simply added daily fuel to a fire. As we all know, honesty is the best (communications) policy.

Hopping back over the pond, Trump’s rival and the new President-elect, has shown himself to be a stark contrast to his opposition. While Trump ranted and fumed over election results, launched legal challenges left, right and centre and refused to leave the White House, Joe Biden took a more measured approach. He stood back from the popular rhetoric and he allowed the facts to speak for themselves. In the weeks that have followed, Biden has largely ignored the obstacles that Trump has, childishly, tried to place in his way and has gone about quietly and steadily forming the next government of the world’s most powerful country.

His more measured and knowledgeable approach, being in direct contrast to his predecessor, is likely to put him in good stead for his presidency.

One of the many things that we will all take away from 2020 is that open, honest and informed communication will never go out of fashion. Whether it’s an election, an unprecedented global pandemic or an error in judgement – honesty is key. 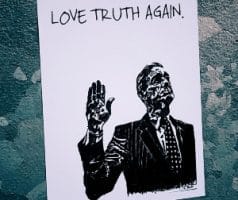