Making a catastrophe out of a crisis

People say a crisis brings out the very best and the very worst in people – but it has also been the case for brands. From 99-year-old Captain Tom Moore raising £27million (at the time of writing) by doing laps of his garden, to our NHS heroes risking their lives every day to save lives, there are people who are so brave you can’t help but marvel at them. Then there are the brands that get it so wrong that they have managed to turn the coronavirus crisis into their own crisis communications scenario.

That has certainly been the case with Premier League clubs putting non-playing staff on the government furlough scheme. It is difficult to understand how the clubs involved – Liverpool, Tottenham, Bournemouth, Newcastle and Norwich – came around to thinking this was a good idea that would be received well by the their market, their loyal, hard-working fans, and society as a whole.

PR is about perception, but part of the art is knowing how your brand will be seen after you make an announcement, make comments or put out a press release. I always mentally risk assess every piece of communications I release for a client to see if there would be any potential negative backlash. Some Premier League clubs – with their unfathomable level of wealth – clearly don’t do that.

I need to put it on record here that I am a lifelong Liverpool fan and when I read the news that my beloved club was furloughing staff, I felt physically sick. I realise that clubs will have lost millions of pounds in revenue as a result of the pandemic, but this is a club that won the Champions League and earned more than £152 million last year. Let’s pause for a second, £152 million. They earn so much money that they can afford to pay striker Mo Sallah £200,000 a week. Yet they want taxpayers to pay the wages of their groundsmen, cooks and cleaners. To Liverpool’s credit, after a vociferous backlash from fans they realised this was a PR disaster of an epic scale and consulted the crisis comms handbook, choosing to apologise unreservedly and perform a dramatic U-turn within two days.

The same can’t be said for Tottenham – the other Champions League finalist who only earnt £145 million last year – they dug their heels in for two weeks before they saw the error of their ways. Even then, chairman Daniel Levy – salary £7 million – couldn’t bring himself to apologise, preferring to say: “We regret any concern caused during this anxious time…” If you get it wrong at least try to make it right immediately and apologise.

The Premier League didn’t come out of this smelling of roses either. Richard Masters, Premier League Chief Executive stressed: “The furlough scheme announced by the Government is meant for the whole economy, including many enterprises which might be regarded as providing entertainment or otherwise dependent on elite talent. We do agree with you that restraint needs to be shown by all and we and our clubs are doing just that.” You could’ve fooled me.

As Julian Knight MP, Chairman of the Department of Culture, Media and Sport Select Committee said: “It is time for the Premier League to stop defending the indefensible. They should be working out a way to carry on playing the wages of staff without taking money from the government scheme.”

Then there are the players who earned more money in a week than most people earn in years but have refused to take a pay cut. To be fair, if reports are correct many players want the cash to go to the NHS rather than their clubs, but it still doesn’t look good. At a time of a global crisis which has killed thousands and threatens to put the world into an unprecedented recession, football has descended into disagreement between millionaires and billionaires over money – much to the rancour of fans. While there may be valid reasons for this spat, the perception for the man or woman on the street is that this is the worst of a morally bankrupt game at the worst of times. In PR terms it’s more than a crisis, it’s catastrophic. 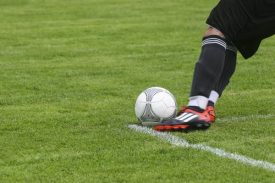