Ignore online reviews at your peril

Can anything stop the rise of online client reviews? Many law firms do not like the prospect of clients having their say online about the service they provided – mainly because of the possibility that it could be subverted by malcontents and competitors – but in a world where many turn to Tripadvisor and TrustPilot as a matter of course, it seems inevitable.

This is particularly as the Competition & Markets Authority and Legal Services Board both view review and comparison websites – digital comparison tools (DCTs), to use the official collective term – as a way of generating an indicator of a legal services provider’s quality.

With firms now required to publish details of price and service standards in various areas of law to help consumers compare and shop around, the focus is now on what quality indicators can help as well.

Reviews will not be the only one, but despite their obvious shortcomings – most consumers assess the experience rather than the actual quality of the legal advice – it seems inevitable that they will form part of the information available for would-be clients.

This is why the Solicitors Regulation Authority, Council for Licensed Conveyancers and CILEX Regulation are currently engaged with dozens of law firms and seven DCTs to pilot how to make reviews work for consumers and firms.

There are also market imperatives. Reviews are out there, whether you want them or not – and this goes for the largest law firms that may think themselves above such things – and lawyers need to keep control of their online reputation, especially as reviews could affect search rankings (particularly Google reviews).

Don’t forget also that there are different types of reviews out there, such as Glassdoor, where current and former employees, and job applicants, anonymously review companies.

So the best option in such circumstances is usually to embrace the inevitable, and it was striking at a webinar I ran recently through Legal Futures to hear how they can trigger a positive, service-driven culture change.

Clive Meredith, practice director of West Country firm Wollens, urged law firms to address online reviews but said they had to go into it with their eyes open. He said: “You are going to get occasional bad reviews… Sometimes they’re justified, sometimes they’re not. There is a tendency in legal that if everything isn’t perfect, we shouldn’t try it. That doesn’t work with client reviews.”

He said Wollens – a high street practice with 150 staff over three sites – signed up to ReviewSolicitors when it was seeing more reviews appear online and fewer new clients simply walking through the door.

“It’s really changed the culture of the firm into being far more service driven, and not just legal driven,” he told us.

Mr Meredith was formerly in the hotel industry, where, he said, the customer was always right even when they were wrong. “Bringing that service feel into a law firm hasn’t been easy at times, but this has been the one thing that has changed the culture.”

Whereas previously many fee-earners only received feedback from clients when something had gone wrong, now they were able to celebrate positive reviews too. With ReviewSolicitors, one of the legal-specific comparison sites out there, each lawyer also has their own star rating and Mr Meredith said “the lawyers love it – it breeds healthy competition… and cultivates good behaviours”.

It was important, he added, to reach a critical mass of reviews, at which point “it really adds credibility to the business” – and it also mitigated the impact of the small number of negative reviews.

Amy Thomas, head of client development at national giant Irwin Mitchell, said negative reviews were almost more important than positive ones, as it helped the firm understand how to improve the customer experience – this has long been said about complaints too, although few firms seem to welcome them either.

She added: “We’ve worked hard to create a bit of a culture where feedback isn’t about an individual’s performance.” The feedback is instead fed into possible training needs or operational changes.

She noted that, “more often than not”, clients who have had their concerns addressed would update their review to report a position outcome.

Sometimes reviews were “unjustified” and she said “you have to work with the platform providers” – although delegates heard during the webinar how hard that was with Google in particular. Irwin Mitchell focuses on TrustPilot and Ms Thomas said the company has always responded “brilliantly” when this has happened.

Helen Lobozzo, head of client care at fast-growing national firm Taylor Rose MW, said it was important with negative feedback not to become “embroiled in an argument on the platform” – firms should take the discussion offline.

Reviews helped drive improvements at the firm, which also runs an incentive programme for staff to help them “celebrate the good feedback they get”.

Ms Lobozzo continued: “Off the back of that, we’ve found that staff have encouraged and embraced the reviews. “When there’s lots of good feedback, it’s much easier to tackle the one or two negative comments we receive.”

Lawyers instinctively look for legal solutions to problems, but the general feeling is that it was a misstep by Summerfield Browne to sue for libel over a negative review on Trustpilot. It won, and rightly so given what the reviewer said, but at what wider reputational cost?

Reviews are here to stay. You can no longer ignore them and can’t sue over every one you don’t like. You need to see them are part of legal PR, and the wider task of building your online brand and trust indicators that are increasingly vital to every practice. 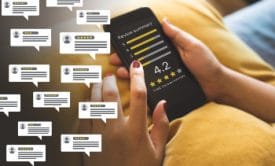