The backlash against law firms that represent ‘climate offenders’

You don’t need to be Greta Thunberg to realise that law firms failing to do their bit for the planet just isn’t acceptable, let alone good legal PR, anymore. Gibson, Dunn and Crutcher found this out earlier this month after hitting the headlines when eco law students launched a boycott of the firm for “shielding corporate polluters from climate accountability”.

The pledge was made by members of Law Students for Climate Responsibility (LSCA), a US-based group that collates a ‘scorecard’ for law firms on how much they contribute to climate change. The arch offenders last year, according to the LSCA, were Gibson Dunn which apparently conducted “the second most anti-climate litigation of any law firm” and “more than any law firm… has used its skills to oppose climate action and the demands for frontline communities”. Pretty damning stuff.

It is easy to dismiss students boycotting a multi-national law firm as irrelevant – how exactly can their boycott harm the multi-billion dollar firm? The answer is simple – extremely bad PR. While Cop26 may have been and gone there is a growing awareness of the importance of doing the right thing, if for nothing else to avoid bad PR. No brand wants to be tagged as helping the planet destroy itself, but that’s where Gibson Dunn firmly find themselves. Not good legal PR at all.

The LSCA climate scorecard awarded firms grades based on their involvement in lawsuits “exacerbating climate change”, their support for fossil fuel transactions and fees received for lobbying on behalf of the fossil fuel industry.

Only 12 law firms were rated an A or B, which meant they did not conduct work for fossil fuel clients. Three firms – Cooley; Wilson Sonsini Goodrich & Rosati; and Schulte Roth & Zabel – have actively addressed the climate crisis through renewable energy transactions, lobbying or pro-climate litigation, according to the scorecard report.

As a legal PR agency we constantly advise clients on how their actions could affect their public image and how to avoid a PR disaster. While every law firm has the right to act for whomever they like, it may now be time to consider the consequences if you decide to defend the ‘bad guy’. The simple fact remains that every individual or company has the right to legal representation. If a notorious criminal is on trial for murder does he deserve a defence? Of course he does. Does an oil company deserve legal representation? Yes, but you don’t have to act for them and if you do you should be aware and ready for the potential bad PR.

It’s understandable why law firms would choose to take the hefty dollar offered by oil companies and other climate offenders. A report in August by the LSCA claimed that in the last five years, the 100 top ranked law firms in the US facilitated $1.36tn of fossil fuel transactions, represented fossil fuel clients in 358 legal cases and received $35m in compensation for their work to assist fossil fuel industry lobbying. That’s a lot of money to say no to.

While we have covered the issues of green washing and doing the right thing by getting B Corporation certification before, the naming and shaming of Gibson Dunn offers a view into the future about the reaction to climate offenders and those who represent them. While everybody has the right to legal representation, just be aware of the potential backlash if you do choose to take the unethical coin of climate offenders. 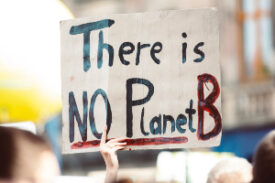