I can only imagine the hundreds of meetings that must have taken place over the last few weeks as law firms linked to Russia scrambled to craft their response to the crisis unfolding in Ukraine.

The unprecedented and devastating scenes of human suffering have sent shockwaves around the world. But firms had little time to strategise before they found themselves painted as villains – ‘enablers’ of Putin’s regime.

In a sweeping and what some thought an unfair statement, foreign secretary Liz Truss accused “London law firms” of blocking the government’s efforts to sanction Russian oligarchs (the same oligarchs later given a month to move their money out the city, which attracted criticism of its own).

Businesses were facing some tough decisions when up stepped Norton Rose Fulbright – one of the largest law firms – to give us all a lesson in how not to respond.

It started with a staff memo, leaked to The Lawyer in the days following the Ukraine invasion, which effectively placed a blanket ban on staff commenting on the financial sanctions placed on Russia.

“Due to the sensitive nature of this topic and the major media interest, please refrain from providing any commentary, whether to the media, on social media channels, in social situations, in external presentations or any other channel.”

The firm said it was standard practice to issue internal ‘no comment’ notices on developing legal and regulatory issues which may directly or indirectly affect clients.

But the backlash was both immediate and public, with the global managing partner of Shearman and Sterling LLP George Casey calling the firm out on LinkedIn.

“To my friends at Norton Rose Fulbright – are you serious?! In this defining moment for humanity, which side of history are you choosing?”

In an equally public U-turn the following day, Norton Rose Fulbright’s global chief executive Gerard Pecht published a statement on LinkedIn in which he said the leadership “unequivocally” stood with the people of Ukraine.

The firm has since announced that it plans to close its Moscow office and cut ties with Russian clients along with providing charitable support to those caught up in the conflict.

The fallout for the legal industry at large has been significant, with more and more firms quitting Moscow every day.

While Norton Rose Fulbright may have grabbed the headlines, however, many firms were slower to respond and some, more than three weeks in, have yet to make their position clear.

Their silence speaks volumes. As a legal PR agency, we regularly advise firms on reputational issues and know that sometimes, however difficult, it’s better to say something than nothing at all.

Be honest, be human. Norton Rose Fulbright may stick in the memory for its ill-judged response, but also for its efforts to turn things round.

The last few years, the last two in particular, have seen a definite shift in what clients want from their law firm and what lawyers want from their employer. It’s no longer just about the salary but a firm’s ethos and its contribution to the world around them, environmentally and socially.

Reputationally, leaving Russia now poses a far lesser risk than staying. Now is the time to stand with Ukraine and those who do not will be remembered for all the wrong reasons.

As well as charitable donations, The Law Society has also listed ways in which lawyers can support Ukraine here. 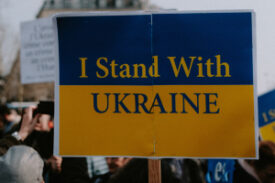